Back to latest posts

The Man Behind the Head 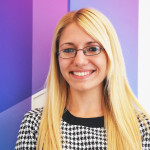 Who is the man behind the head? What head I hear you ask…the phrenology head! And to answer, a little history lesson is needed.

Phrenology was a popular 19th century theory stating that intelligence, personality and character traits are revealed by the location of various contours, or bumps, in the skull (Fodor, 1983). This so called “science” came from the theories of Viennese physician Franz Joseph Gall (1758-1828) whose basic tenets were:

So it was believed that by examining the shape and unevenness of a head or skull, one could discover the development of the particular cerebral “organs” responsible for different intellectual aptitudes and character traits. For example, a prominent protuberance in the forehead at the position attributed to the organ of Benevolence was meant to indicate that the individual had a “well developed” organ of Benevolence and would therefore be expected to exhibit benevolent behaviour.

Not surprisingly, phrenology attracted many critics and the “science” died away in Britain by the early 1850s. Yet, the American Fowler brothers bought phrenology back to life and the new movement was re-introduced to Britain in the 1860’s. Less scientifically pretentious and more overtly entrepreneurial, the Fowler’s swept through Britain, establishing various phrenological institutions, societies and publishing concerns. Indeed, it was this movement which was largely responsible for the head reading craze of the latter 19th century. Lorenzo Niles Fowler (1811-96) was particularly interested in the casting of plaster phrenological busts and these are still around today. Indeed, a phrenological bust in an antique shop today will almost invariably bear the label “L.N. Fowler”, and they are quite the collector’s item.

The heads were clearly labelled in simple language so that people could become self-taught phrenologists whether for scientific experiment, education or pure entertainment. Why don’t you have a go yourself? 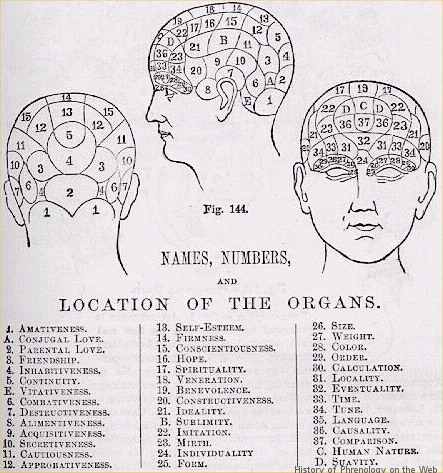 Of course, a skilled phrenologist knew not just the cartographic layout of the head according to the latest phrenological chart, but also the personalities and pros and cons, of each of the 35 odd organs. So don’t think you’re an expert just yet!

What has been proved and disproved?

History aside, what really became of phrenology? Was there any sense to it, or was it all nonsense?

First for the good points:

Therefore, phrenology can be understood to have been diffused and absorbed into a host of other practices and as such, many of its components do live on.

But as you might imagine, phrenology itself is now regarded as obsolete, due, in part, to the reasons outlined below:

So there you have it, history lesson completed. Ultimately, most of phrenology’s basic premises have been vindicated, though the particulars of reading character from the skull have not. Which stance do you take?

Personally, countless University lectures on the true nature of science have made me sceptical of such ideas. Think of all the factors that could contribute to a bump on the head – an accident, genetics, parents dropping you on your head at birth (I wouldn’t rate your parents if this was the case). Is that a bump behind my ear I just felt? Destructiveness you say, an organ supposedly prominent in the various murderers of our world – sincerely hope this isn’t the case!

Habit5 is a research company that helps clients understand their customers better, in order to create mutual value and in turn be better understood by them. The brands that understand best will do best.

This website uses cookies to improve your experience while you navigate through the website. Out of these, the cookies that are categorized as necessary are stored on your browser as they are essential for the working of basic functionalities of the website. We also use third-party cookies that help us analyze and understand how you use this website. These cookies will be stored in your browser only with your consent. You also have the option to opt-out of these cookies. But opting out of some of these cookies may affect your browsing experience.
Necessary Always Enabled

Any cookies that may not be particularly necessary for the website to function and is used specifically to collect user personal data via analytics, ads, other embedded contents are termed as non-necessary cookies. It is mandatory to procure user consent prior to running these cookies on your website.